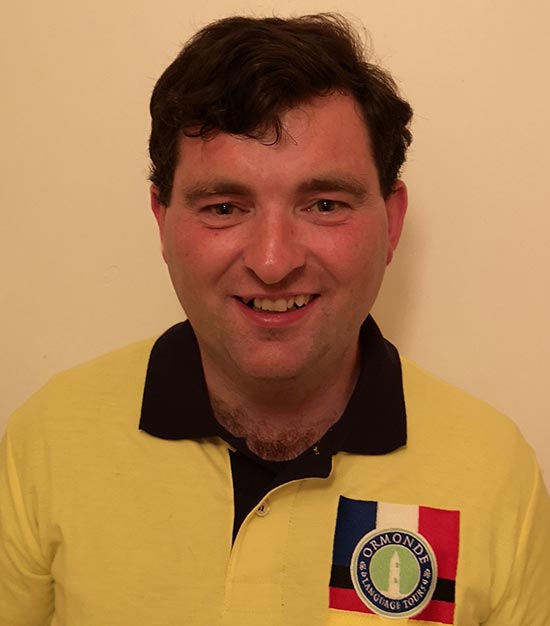 My name is John Britton. I was born and grew up in Kilkenny city. I have a diploma in International Hotel Management and Business Studies from the renowned Shannon College of Hotel Management. Since four years, I have been studying part-time for a BA (Hons) in Modern Languages with the Open University. I have worked in the hospitality industry for approximately twenty years and I continue to do so part-time. I have worked in England, Switzerland and France. For the past few years, I have worked seasonally as a tour guide here in Kilkenny, firstly at Jerpoint Park and then in Kilkenny Castle. I have a great love of languages and history and I feel privileged to be able to combine these and share them with you.

My love of languages.

I was not academically gifted when it came to languages in school. My grades in both French and Irish were very poor. Whilst studying hotel management at Shannon, I spent a year long placement in French-speaking Switzerland, in a town called Montreux. From the beginning here, I tried very hard to speak French. When I returned to Shannon a year later, I could speak French very well and I had caught the language bug. For my fourth year placement, I chose to work for Sofitel in Paris as I believed that a good command of French would be able to open many doors in the future. The title for my college thesis was “language barriers in the hotel industry”. I worked for Accor hotels in Birmingham, England, where I was presented with another opportunity, to transfer for one year to Zurich, Switzerland. I thought this would be a great opportunity to learn German. One year later I returned to Ireland with a basic command of German but mixed with the local Swiss-German dialect. I would continue to use both languages in the hotel industry. In recent years I found work tour guiding at local sites. This really developed my confidence speaking telling our story in foreign languages, which I love. I believe I have wonderful luck to stumble upon this skill. In 2015, I enrolled for an honours degree in modern languages with the Open University. My goal is to be able to speak French and German correctly. I am currently in my final year studying German.

My love of history

Sitting around the fire in Britton house was always full of stories. Both my parents come from Kilkenny as do three of my Grandparents. We were told of local legends and of years gone by. Much to my wife’s annoyance, I am forever going into museums and factories when we’re on holidays. My love of history and languages came together a few years ago, when I got a job at Jerpoint park in south Kilkenny, I learned so much. Later to work at Kilkenny castle, the jewel in Kilkenny’s crown was a dream. I continue to learn about local history, there are so many fascinating stories. My focus is on people through history and I have many to tell you about on our walking tour.

My love of Kilkenny

I love my home city and I feel lucky to have been born in such a wonderful location. I lived eight years away from Kilkenny and it was a wonderful time that thought me so much but I’m a home bird. Having lived in England, Switzerland and France, I returned to Kilkenny in 2007. One thing you can’t get away from in Kilkenny is hurling. This is a sport that is played almost uniquely in Ireland or by Irish people abroad. My dad was hurling mad, always dragging me to games up and down the country. During the summer it is impossible to pass a weekend without talking about hurling, even if you have no interest in the sport. Whilst abroad I would often come home for big games involving the “cats”. Another thing particular to Kilkenny is ale, I like a lot of Kilkenny people, enjoy a pint of Smithwicks on my evening off.

Whilst working locally, I noticed there are no guide-lead walking tours through foreign languages. I’ve had to translate for my wife on a few tours abroad and it can be difficult. This is why I set up Ormonde language tours, to specialize in foreign language walking tours through Kilkenny. I also offer private tours in English. To make it easy, I conduct each walking tour in a single language. I offer four walking tours each day, two in French and two in German. I recommend that you pre book a walking tour as slots may fill. The walking tour will bring you through the most important, beautiful and interesting sites in the city and I will tell you the stories about my home city through your language. Each walking tour lasts approximately 90 minutes. The walking tour is ideal if you are stopping for a short while in Kilkenny, if you have children with you or if you or your partner would prefer to have our complicated history and culture explained to you through your language.

The walk through Kilkenny has given us many new insights into the city and life. John answered all the questions we had and was available later. Viola

John showed us his “Kilkenny” in a two-hour guided tour with lots of interesting information. We could always ask questions Sylvia